Diamond Genetics had good results last week during the December Index Run. Especially at the daughter proven Red & White and Black & White bulls. DG Charley is the #1 B&W daughter proven bull in the United Kingdom at ABS. DG Charley is a Supershot son out of DG Candide VG-85-NL VG-88-MS 3yr. She is a Mogul daughter out of Larcrest Cale VG-89-USA DOM out of Lacrest Crimson EX-94-USA EX-96-MS GMD DOM from the famous Lacrest Cosmopolitan VG-87-USA GMD DOM. Another success was for R DG Aladdin-Red, he is the number 1 daughter proven R&W bull in the United Kingdom @Cogent.

R DG Aladdin-Red is a Entitle grandson from BTS Avea-Red VG-89-NL backed by Kamps-Hollow Altitude *RC EX-95-USA 2E DOM. Aladdin is bred by Rijnhof Holsteins and Diamond Genetics. The #1 daughter proven B&W bull in Germany at +158 RZG, bred by Veelhorst Holsteins and Diamond Genetics, is Veelhorst DG Casino @VOST. Casino is a DG Charley son and backed by Broeks Betty VG-88-NL VG-89-MS 2yr. one of the world’s best Snowman daughters. The #1 R&W daughter proven bull in Germany at SBS / AI Total is OH DG Alaska. He is a Pat-Red son out of an Aikman daughter out of Planet Elaine VG-88 going back to the Rainyridge Tony Beauty EX-CAN family. Alaska has +148 RZG and for type +140 RZE! He is bred by De Oosterhof Holsteins and Diamond Genetics. 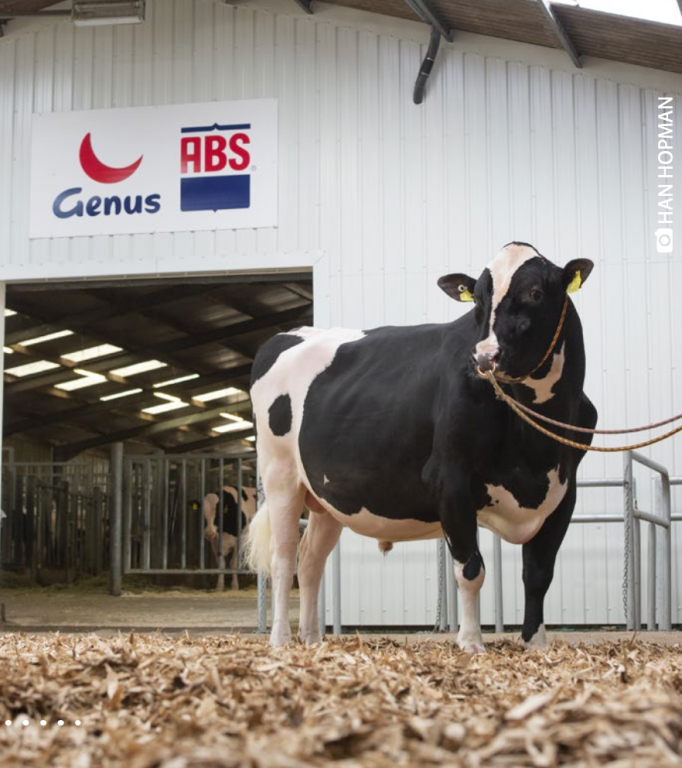 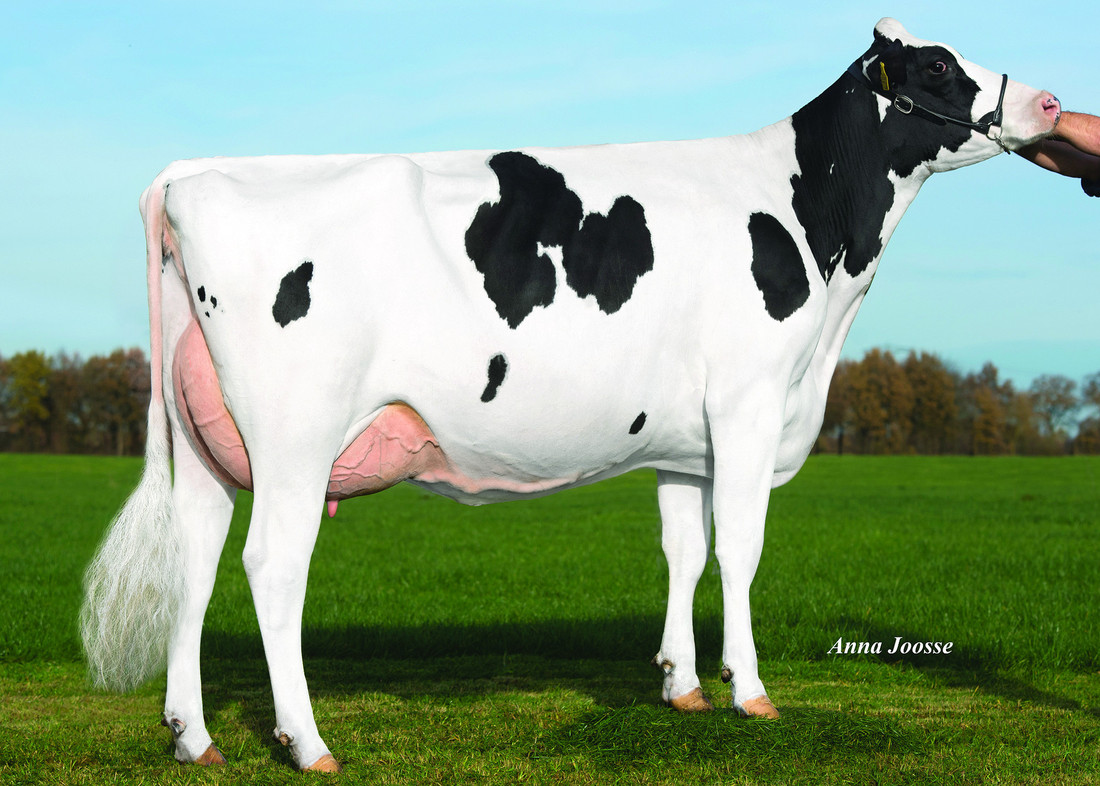 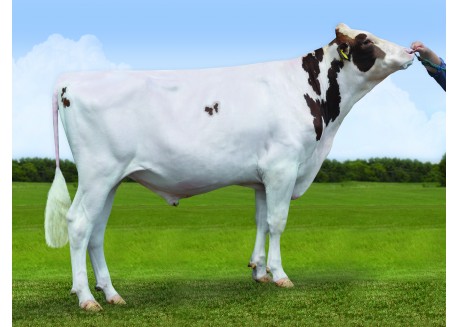 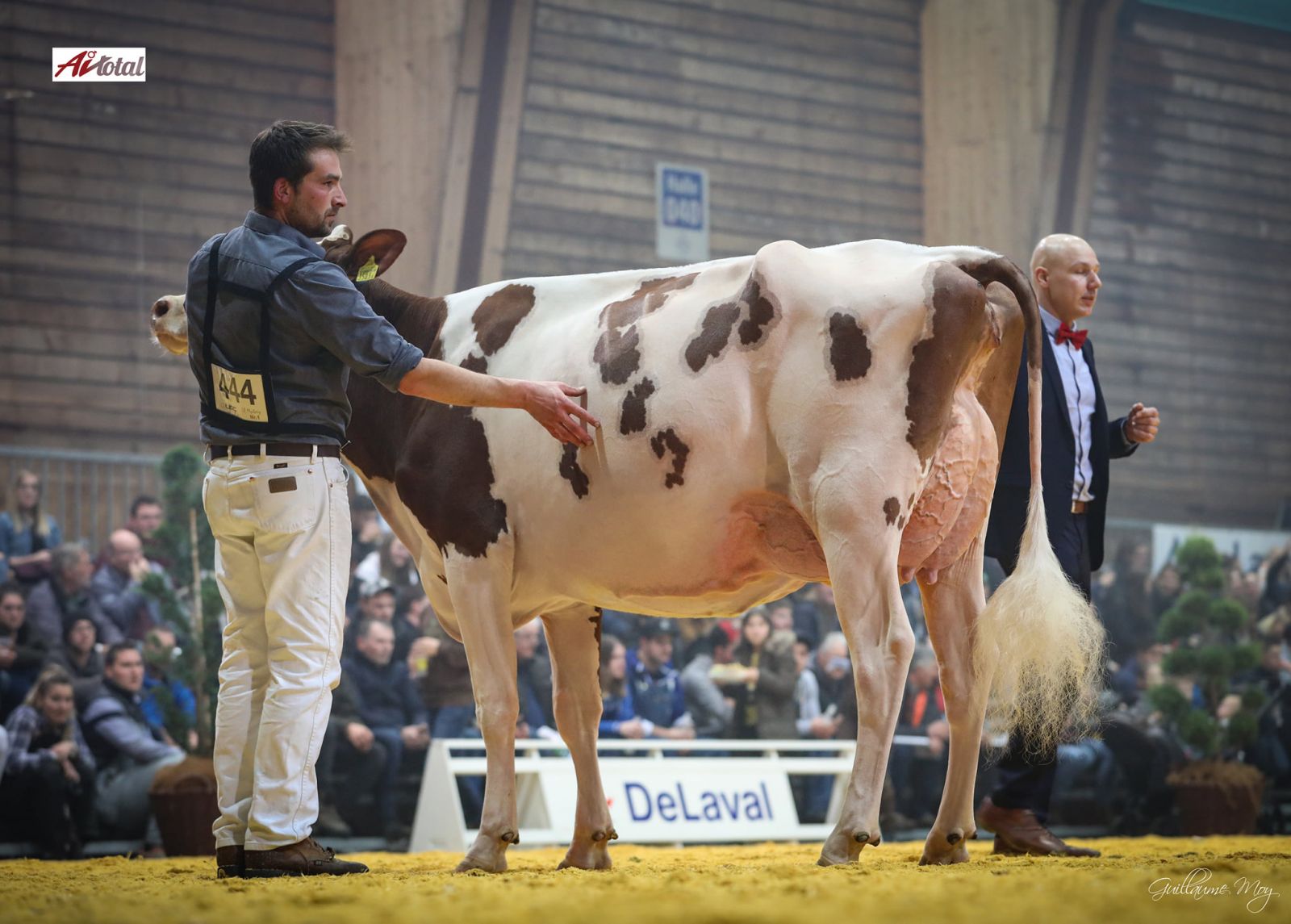 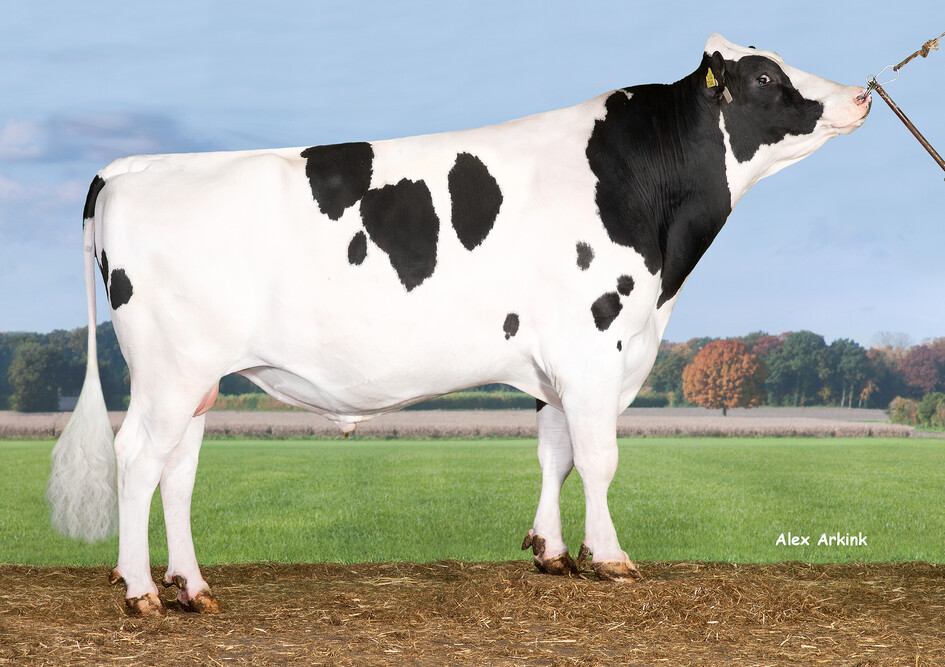 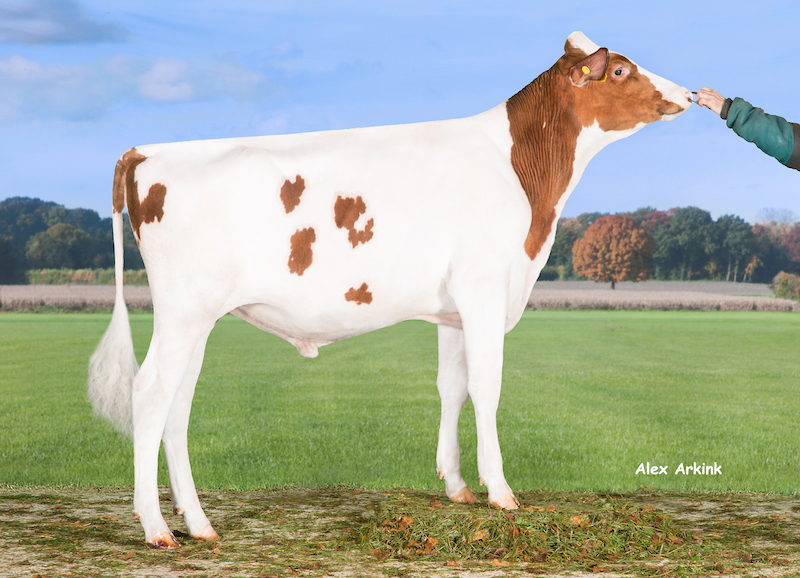 Luc Nijensteen, Luc will work on the DG donor station and will take care off the day to day care of the animals. A very important job, we are sure Luc will be able to make the difference there! Luc has a passion for farming and has already a life long experience in this field. Laura Uineken, Laura will work on the Eurogenes website and support the various sales Diamond Genetics is co-managing. Laura has a passion for breeding and showing cattle and a life long experience in this field.

As of September 1st Ing. Pieter Pasterkamp joined Diamond Genetics. Pieter graduated in 2016 from Aeres Agree as an agricultural engineer. Right after leaving college he started working for a company in the fishing industry, where he had roles in sales and logistics. Pieter has always had and kept a special interest for breeding, he aims to offer trouble-free genetics that suits the local need of dairymen.

Pieter is married with Janselien and they are expecting their first child in January. Welcome to Diamond Genetics Pieter! Four of out of the top ten daughter proven bulls in the Dutch Interbull NVI list are sourced or bred by Diamond Genetics.

At the first place we find NH Mitch bred by Nosbisch & Sunview Holstein. He is a Kerrigan sons out of NH Balisto Marilyn Monroe VG-86. She was the top seller at the German Masters Sale 2014 for 86.000 EUR, was no.1 production cow in Germany in her first lactation and was shown at the National Show in Germany.
NH Mitch is followed by Hurtgenlea Richard Charl, the son of the true breed legend DG Charley. Hurtgenlea Richard Charl is the number 1 GTPI daughter proven bull in the world but also sky high in several other countries as well.
At the the third place we find Riethill Summerlake, the complete DG Charley son from the NH Super Islandwave family. He combines huge production and great health traits. Further in the top 10 we find Casino, the DG Charley who comes from the line of the world famous Snowman daughter Broeks Betty VG-88. The 2 ELITE Wagyu donors EMW Himawari and WVF MS Kikuya-ET have the donorstation of Diamond Genetics in Wijhe and will have embryos available for sale soon.
They are exceptional Wagyu heifers and from the greatest original Japanese bloodlines, with some of the legendary sires of the breed in their pedigrees. They have high genomic tests and are free of all known recessives. The very first heifers have been arrived at the new donor location of Diamond Genetics in Wijhe, the Netherlands. In March 2016 the first doses of DG CHALEY where shipped to the United States. Right away after arrival in the US, the AMS Genetics team distributed these doses for the first flushes and IVF-sessions. Among these first sessions was a top Yoder daughter at Hurtgenlea named Hurtgenlea Yoder Modesto. Looking back this early shipment was one of the most influential shipments to come from Europe to the United States since the semen of  Shottle arrived.

Just before the New Year of 2017 the first DG Charley calves where born in the U.S. The results would come in in February… And then the results came in, first the group including former no.1 RZG bull Siemers Merryguy. But then the second group… Hurtgenlea Richard Charl was there… the New Number 1 GTPI and Net Merit.
An agreement with Sexing Technologies was made and as part of that agreement semen would come to Europe exclusive for contracts with Diamond Genetics and Sexing Technologies would use the bull in the United States. This partnership resulted in the highest GTPI bull born in 2018 in the United States Genosource CAPTAIN and the highest GTPI bull born in Europe DG PAUL.

Since August last year the first daughters of Hurtgenlea Richard Charl started to calf in. The daughters milked a lot and especially their components where at most impressive. Also their udders and feet & legs where better then expected…. This resulted in an impressive climb in his April 2021 breeding value bringing him to the most desirable title in the Holstein Breeding scene the number 1 place on the International TPI list!  Being used heavily in the Diamond Genetics and it’s partners breeding programs there are several daughters on the way and pregnancies by his highest son Captain are coming. With these genetics Diamond Genetics ensures the necessary level of genetics to it’s clients among the world. In the March 2021 issue of Holstein International, you’ll find a unique world wide Cow Family Tournament hosted either by Holstein International. Over 50 influential cow families are nominated for this award. On this exceptional list we find several cow families which are developed or discoverd by Diamond Genetics. Many offsprings are spread all around Europe. It’s up to you to vote for your favorite! Click further to find out more.

Baviere
Baviere is bought by DG France and developed herself into a world known cow family inside Europe.

Bel Iron Irene
Two Bolton daughters: Bertaiola Bolton Lidia and Bertailo Bolton Serena were bought by Diamond Genetics as pregnant heifers in Italy. The combination of Bolton which provides lots of milk but needed daughter fertility in combination with Boss Iron and Mtoto made this pedigree from the start very unique in the World. Two months after calving both Bolton daughters, Lida has calved from an Alexander daughter, left to the Netherlands were this Italian cow family would stamp his mark.

Chemello Jocko Benge
Chemello Jocko Benge has been bought by Diamond Genetics in Italy. She developed herself into one of Europe’s most succesful cow families with lots of daughter testing bulls which can represent themselves with the current GTPI market.

Grietje 80/ Genua
The line which made Grietje 80 famous, was via her Aaron daughter Genua. Genua went from Germany to the Netherlands as a pregnant heifer. Oman embryos went to Denmark were the start of this succesful cow family began. Oman embryos were either sold to CRV, this resulted in DT Impress and DT Improver. Nowadays one of Europe’s most successful cowfamilies.

RUW Neblina
Oman embryos were bought via Diamond Genetics at Veenhuizer Holsteins and sold to Tirsvad-Anderstrup in Denemark. This was the fundamental of the Tir-Ann Neblina line.

Bolton Cinderella
This cow Giessen Bolton Cinderella was bought by Diamond Genetics at Giessen Holsteins as a fresh 2-Yr Old. She moved to JK Eder Holsteins and developed into a leading line of the Roxy family with as highlights the Snowman sons JK-Eder-I Control @ Semex and JK-Eder Ciderman @ AI-Total.

Amarante
This famous family of the brothers Cabon from France. DG and JK Eder Holsteins imported the in meantime famous Emeraude after her win at the Space show in Paris. Nowadays Emeraude is the ONLY cow alive in Europe with 6 EXCELLENT daughters. DG Sniper was an early Kingboy son resulting from a Snowbiz Sympatico Sal VG-86-USA 2yr.
Snowbiz Sympatico Sal was a daughter out of Gen-I-Beq Snowman Summer. She was bred by the Snowbiz Syndicate. The Snowbiz Syndicate was Trans-Atlantic partnership between mostly Canadian and European breeders including Diamond Genetics, Giorgio Rosetti, Dave Eastman, O’Connor Holsteins and managed by Albert Cormier. The Syndicate bought a group of high profile Snowman daughters and worked with these cows for one generation. At the dispersal sale many influential animals have been sold , inclucing the Snowbiz Symatico Sal animal to Diamond Genetics.  Diamond Genetics flushed her intensively and implanted embryos in the US as well in North America. From the US pregnancies the Kingboy son DG Sniper was born and sold in an online bull sale to Ascol & AI Total. Snowbiz Sympatic Sal was the full sister to Snowbiz Sympatico Sofia, the dam of Salvatore *RC and the source behind several strong and influential Red & White lines. Pictured are a group of 5 2nd calf SNIPER daughters at Anderstrup Holsteins in Denmark.